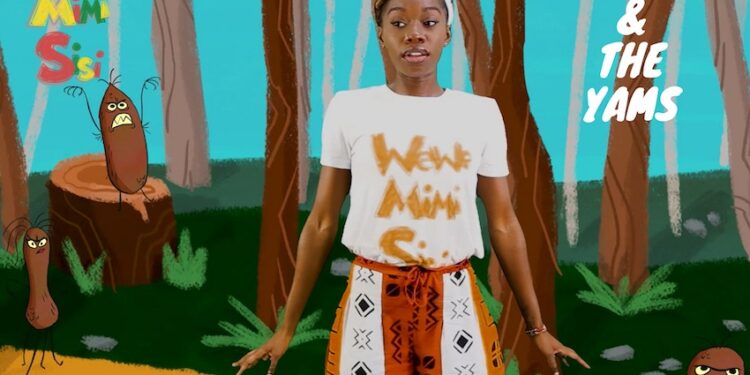 
TRANSLATED AS ‘You, Me, Us’ in Swahili, Wewe Mimi Sisi is a passion project developed by Drop A Jewel Network founder Nii Klotey Quaye and his five-year-old daughter Xolani set to adapt classic African stories into fun and interactive programs for children, which incorporates captivating storytelling with dynamic yoga movement and exercise.

Often, we have tried to teach our children their culture out of context of their reality

The project wass created in a bid to help them develop their physical and mental health and improve their overall wellbeing.

Premiering on YouTube on November 27, the pilot episode of Wewe Mimi Sisi retells the classic and riveting Ghanaian tale of Anansi & The Yams.

Packed with life lessons for children, whether it is of the perils of laziness and deceit, the dangers of revenge, or the benefits of friendship, Wewe Mimi Sisi can teach children, while also encouraging them to stay active.

Created by father and daughter in the middle of lockdown over the summer, the idea for Wewe Mimi Sisi was birthed from Xolani falling in love with children’s shows on YouTube that brought together storytelling and movement, and Nii wanting to instil Garveyite principles in his daughter from a young age, while also seeing an opportunity to plant the seed that ‘thoughts become things’.

Before long, Nii and Xolani came to an agreement to adapt one of Xolani’s favourite classic African stories Anansi & The Yams for the small screen, and with the further intention of developing more classic tales and fables from Africa and the diaspora, Wewe Mimi Sisi the series was born.

The ethos of Wewe Mimi Sisi has quickly evolved into a celebration of the union between ancient African wisdom and contemporary black excellence to give life to a beautiful future legacy for black children, while the creation of the series is also fostering and sowing seeds of stronger community within the African diaspora, driven by the all-black cast, crew and creatives that are bringing Wewe Mimi Sisi to life.

The team boasts a passionate yoga student and fashion designer in Haliymah, who starred in and co-produced the pilot episode Anansi & The Yams, illustrator Selom Sonu, who created all the art for the pilot, 16-year-old music student and burgeoning producer OMadeIt, who curated the soundtrack for the episode, internationally renowned musician Mikel Ameen, who developed the Wewe Mimi Sisi theme song, and the black-owned production company Studio 44 that filmed and edited Anansi & The Yams.

Speaking about the inspiration for the Wewe Mimi Sisi series, Drop A Jewel Network founder Nii Klotey Quaye says: “Following the teachings of Dr Khalid Muhammad, it’s important for us to receive both information and inspiration.

“Often, we have tried to teach our children their culture out of context of their reality.

“This offering serves to correct this approach by putting children at the heart of Africa, and allowing the Africa that is in their hearts to blossom. ‘Wewe Mimi Sisi’ is a celebration of the union between ancient African wisdom with contemporary black excellence which gives life to a beautiful future legacy for our children”.