(Natural News)
Is your employer demanding that you get “vaccinated” for the Wuhan coronavirus (Covid-19) in order to continue working? If so, consider joining the tens of thousands of health freedom advocates from all across the country who will be participating in next week’s Nationwide Walkout & Stand for Freedom event.

Advocates for Citizens’ Rights, a California-based non-profit group founded by attorney Leigh Dundas, along with Robert Kennedy Jr.’s Children’s Health Defense (CHD), have together organized a voluntary work strike across multiple key sectors of the economy, including healthcare, education, telecommunications, supply chain, transport and government. The strike will take place for four days from November 8-11.

Anyone is welcome to participate, of course, but these key industries really need to feel the heat as they are among the worst offenders when it comes to forcing Fauci Flu shots on their employees. The following flyer has more details about the four-day no-show event, which aims to put an immediate end to the Biden regime’s fascist jab mandates. 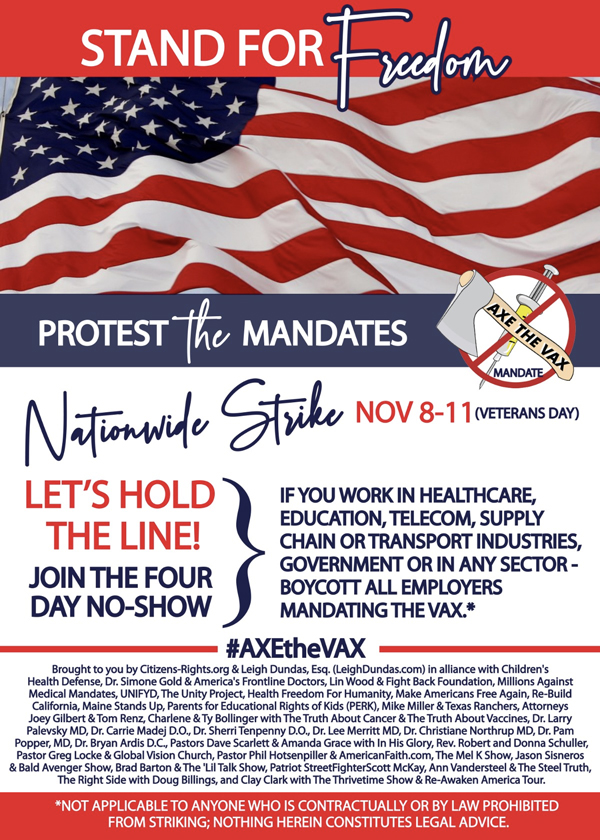 “This nationwide walkout has spread like wildfire, with white collar professionals joining the supply chain workers and truckers – and employees from every industry and all faiths, creeds, races and political affiliations – now pledging they will strike during the week of November 8, as a statement that jobs should never be conditioned on medical mandates and tyranny,” Dundas is quoted as saying.

Will you stand in solidarity with America’s workforce to promote health freedom?

Up until this point, there have only been sporadic walkouts here and there that have had a nominal impact, but not enough to end the tyranny. Freedom-loving Boeing employees, for instance, started a grassroots movement where they are now skipping work every Friday as part of a routine “sickout” protest.

Employees at Southwest Airlines, American Airlines, and Amtrak, among others, are doing much the same thing, which is believed to be the reason for continued flight and train cancellations.

All of this is voluntary, just to be clear. Nobody is encouraging any employees to do anything illegal. The goal is simply to take a stand for what is right and hopefully put a stop to the escalating government overreach when it comes to people’s bodies.

Forcing people to get injected with mystery chemicals that they do not want is a form of medical rape that must not be tolerated. My body, my choice must always be preserved when it comes to the practice of medicine, as anything done to someone without their consent amounts to medical violence.

Among the supporters of this event are Clay Clark and General Flynn, who co-host the Re-Awaken America Tour, Dr. Simone Gold of America’s Frontline Doctors (AFLDS), Ann Vandersteel, and Doug Billings, among many others.

“A couple weeks ago, I started getting calls from the blue-collar guys,” Dundas is further quoted as saying. “You know, the folks who actually run this country. Because Americans don’t often have cause to reflect on this simple truth, but the fact is that this country does not run on the backs of people like you and me. It runs on the backs of blue-collar workers who make products, and who move products.”

“The blue-collar folks I talked to were working at large companies that were 40%, 50%, and often as high as 75% unvaccinated – and willing to hold the line. These guys are drawing a line in the sand, making a stand for freedom. And I believe in my core that the week of November 8 will go down in the history books as the day that freedom rose up, tyrannical mandates went on the run, and history was changed for the better.”

The latest news about the Chinese Virus can be found at Pandemic.news. 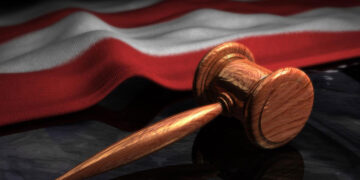 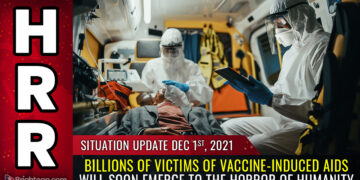 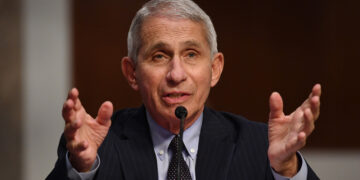