We have a new trailer for Outside the Wire. This is a new action/sci-fi movie coming down the pipeline from Netflix. It will be one of the early original movies released by the streaming service in 2021 and it comes from director Mikael Hafstrom, with Anthony Mackie, who is known for playing Falcon/Sam Wilson in the Marvel Cinematic Universe, in the lead role. As we can see, Mackie is keeping up with his superhuman shenanigans here as a militarized android fighting high-tech enemies in the future.

The trailer opens with a young member of the military being handed a mysterious new assignment. Anthony Mackie’s character Leo is guiding him through what it is they do in this futuristic outfit. They are tasked with taking futuristic weapons outside of secure zones. We come to find that Leo is quite special, as he has been upgraded with advanced tech and weaponry, making him an android soldier. The footage is loaded down with action, robots and explosions. The trailer also makes sure to note that the same producers who were behind Extraction and The Old Guard, both of which proved to be big hits, are involved here as well.

Mikael Hafstrom has previously directed movies such as 1408 and Escape Plan. He also collaborated with Netflix in the past, directing several episodes of the series Bloodline. The cast also includes Damson Idris as Harp, Enzo Cilenti as Miller, Emily Beecham as Sofiya, Michael Kelly as Eckhart and Pilou Asbæk as Victor Koval. Rob Yescombe and Rowan Athale penned the screenplay. The project was originally announced by Netflix last year, with production taking place in summer 2019. 42, the production company behind the project, has a multi-year deal in place with Netflix, which extends to development, production and financing.

Outside the Wire is set in the future and centers on Harp (Damson Idris). He is a drone pilot who is sent into a deadly militarized zone where he finds himself working for Leo (Anthony Mackie). The android officer is tasked with locating a doomsday device before the insurgents do. Ben Pugh, Erica Steinberg, Brian Kavanaugh-Jones, Anthony Mackie and Jason Spire serve as producers.

Anthony Mackie has stayed quite busy, both within the MCU and with projects outside the superhero realm. Mackie recently teamed with Netflix on Altered Carbon season 2, where he took over the leading role. He is also set to star in The Woman In the Window, which is expected to arrive next year. On the Marvel side, he is returning as Sam Wilson in The Falcon and the Winter Soldier for Disney+. The miniseries will take place after the events of Avengers: Endgame. Sebastian Stan will also return as the Winter Soldier. A trailer was recently released for the series as part of Disney’s investor day presentation. So next year is shaping up to be a big one for Mackie. Outside the Wire arrives on January 15 on the Netflix streaming service. Be sure to check out the trailer for yourself.

Topics: Outside the Wire, Netflix, Streaming 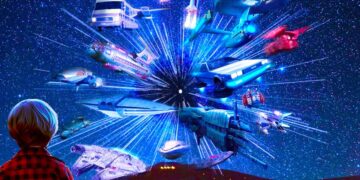