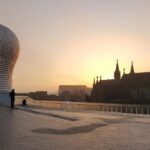 
Dua Lipa has accumulated quite the collection of trophies, from Grammys to Brit Awards, Guinness World Records and now, and the European Excellence Award.

The pop superstar received the Excellence Award over the weekend, an honor that recognizes positive representation of European culture through an artist’s music, and the best in the business from the ESNS Exchange, previously known as European Talent Exchange Programme.

Only those acts that are seen as strong ambassadors for European music, and as role models for fellow European stars-on-the-rise, are considered for the hardware.

Lipa, who is British of Albanian origin, nails the brief.

Her career has gone supernova in recent years. In March 2022, Lipa’s hit “Levitating” logged a 70th week on the Billboard Hot 100, in doing so rewriting the record for the most weeks ever spent on the survey for a song by a woman. Among all acts, “Levitating” is just the fifth single to spend at least 70 weeks on the Hot 100, dating to the chart’s August 1958 inception.

Earlier, in 2021,”Levitating” was named the top Hot 100 song for the year in the United States, and its parent album, Future Nostalgia, logged four weeks at No. 1 in the U.K., before scooping British album of the year at the BRITs.

ESNS presented Lipa with the award during her keynote interview for Eurosonic Noorderslag 2023 in Groningen, the Netherlands, at which she discussed the release of her sophomore album during the pandemic, the successful world tour in support of it, and the Lipas’ Sunny Hill Festival in the Kosovo capital, Prishtina which was shortlisted for the European Festival Awards and which they hope will put the country on the cultural map, and raise much-needed funds to develop the nation’s arts and cultural sector. Just last year, she was named honorary ambassador to Kosovo.

Lipa first performed at ESNS at Vera in 2016, and the following year won the European Border Breakers Awards (EBBA), now called the Music Moves Europe Awards (MMEA). Also in 2016, she won for newcomer of the year at the European Festival Awards.

The 27-year-old now turns her attention to the fashion world. As announced by Vogue on Wednesday (Jan. 18), she has signed on to be one of four 2023 co-chairs for the A-list fashion event that comes around every first Monday in May.